Another post related to US elections and mapping! After my previous analysis of the 2016 presidential elections, it just makes sense to come back to this topic after the recent midterms. Public availability of election data has not improved greatly since the last time I checked, but luckily I was able to conveniently get all (well, most) results from the New York Times results page, without any time-consuming scraping. How so? The data for the interactive visualization is pulled from a publicly accessible JSON file!

As always, you can follow along with the Jupyter notebook on my Github. In my previous analysis, I was a beginner with (geo)pandas and for the most part extracted all data into separate variables to work with. This time, I made a point to try to follow best practices and work within Dataframes.

The data used here comes from the NYT and the US Census website. In particular, we have:

I am making available the combined data in the GeoJSON format on my GitHub, see below.

Working with the data was relatively straightforward. All shapefiles are easily loaded/processed with geopandas, for example, here I load the US state maps and the congressional district boundaries, and add the state 2-letter abbreviation from the former to the latter:

One of the common issues with mapping the United States is deciding where to put Alaska and Hawaii. My solution is the following: 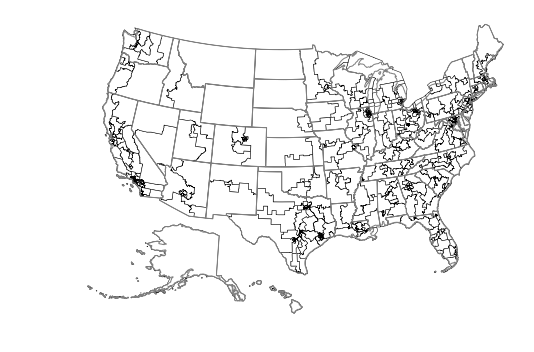 The keys for the cd_votes dictionary are in the STXX format, where ST is the 2-letter state abbreviation and XX is the house district number. For each district, we then have per-party vote counts.

As it turns out, there are A LOT of non-mainstream parties. For simplicity, I only consider four main parties (Democrat, Republican, Green, Libertarian) and conflate all the other votes into the Independent category. 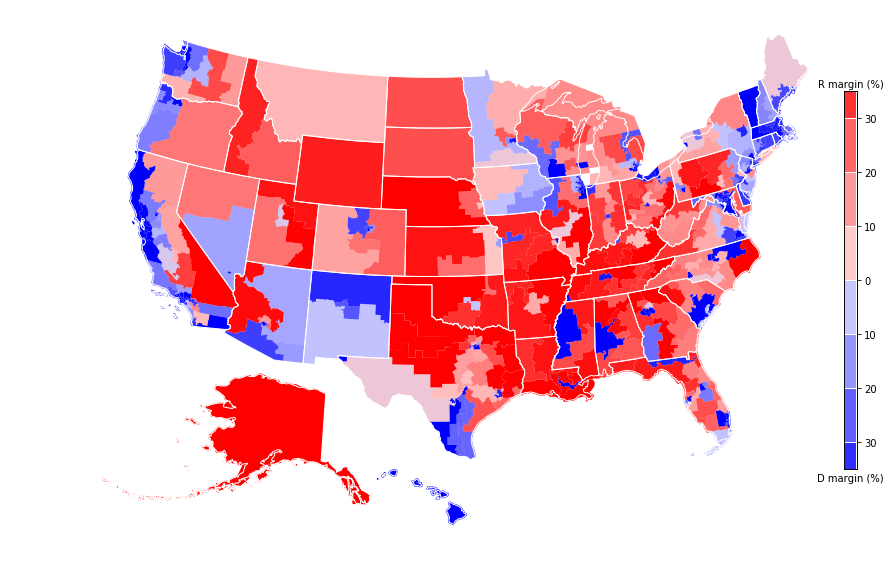 It is relatively straightforward to go from district-level to county-level data: this is because the election data itself is breakdown at the county level (the JSON file has data['races'][i]['counties'] specifying how many votes each candidate received in each county that makes the district):

We have parsed the JSON file as was done previously, except now we are iterating over the counties in each district, and for each county tallying the vote by party. If a county spans multiple districts, the dictionary is first created and then more votes are added to it when it is visited by iterating over the other districts. We then create a Dataframe and (not shown in the snippet above) as before, we conflate all non-major-party votes into the Independent category.

Short aside: what to do with the uncontested races? In those cases, I could get the vote totals from Ballotpedia, but getting the county breakdown would have meant to go through each state official election results portal, and that seemed like too much work to yours truly (plus, I knew for sure of the four Florida races where no results are available at all). A crude estimate is the following: the votes can be split according to the fraction (in terms of area) of the district that each county occupies. So if a district fully covers two counties and half-covers one, the three counties will get 2/5, 2/5 and 1/5 of the total votes (in this example all counties have the same area). Obviously this is a crude estimate (for example basing it on number of voters would be better), but it’s the simplest approach given the lack of data. At the end of the day, it should not matter too much as this step is taken only for the handful of uncontested races.

Shorter aside: Alaska reports its result by precinct and not by county (or borough as they are called there), which means that not even the NYT has county-level results. Because of this, and because just splitting the votes with respect to the counties would not be accurate at all (this time this is not an uncontested race, so the margins matter), I drop Alaska from the analysis.

Now I can load the counties shapefiles, shift Alaska and Hawaii, and merge them with the county-level votes dataframe I created above. The result is the following county-level map: 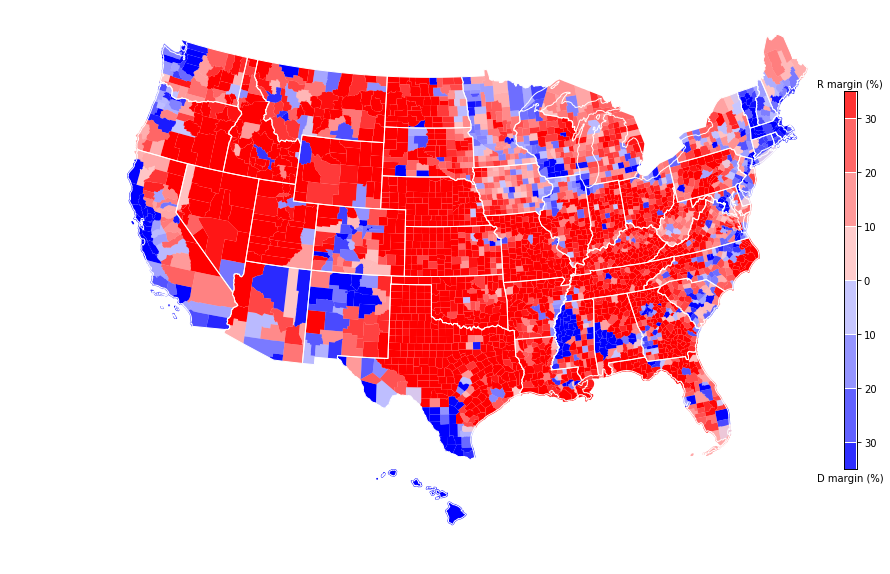 Notice how even in states with a single house district, there is a lot of internal variability (most visible in Montana, Idaho and the Dakotas).

Now, because I had already created similar maps for my cartogram project, I can show the 2018 (left) and 2016 (right) maps side by side: 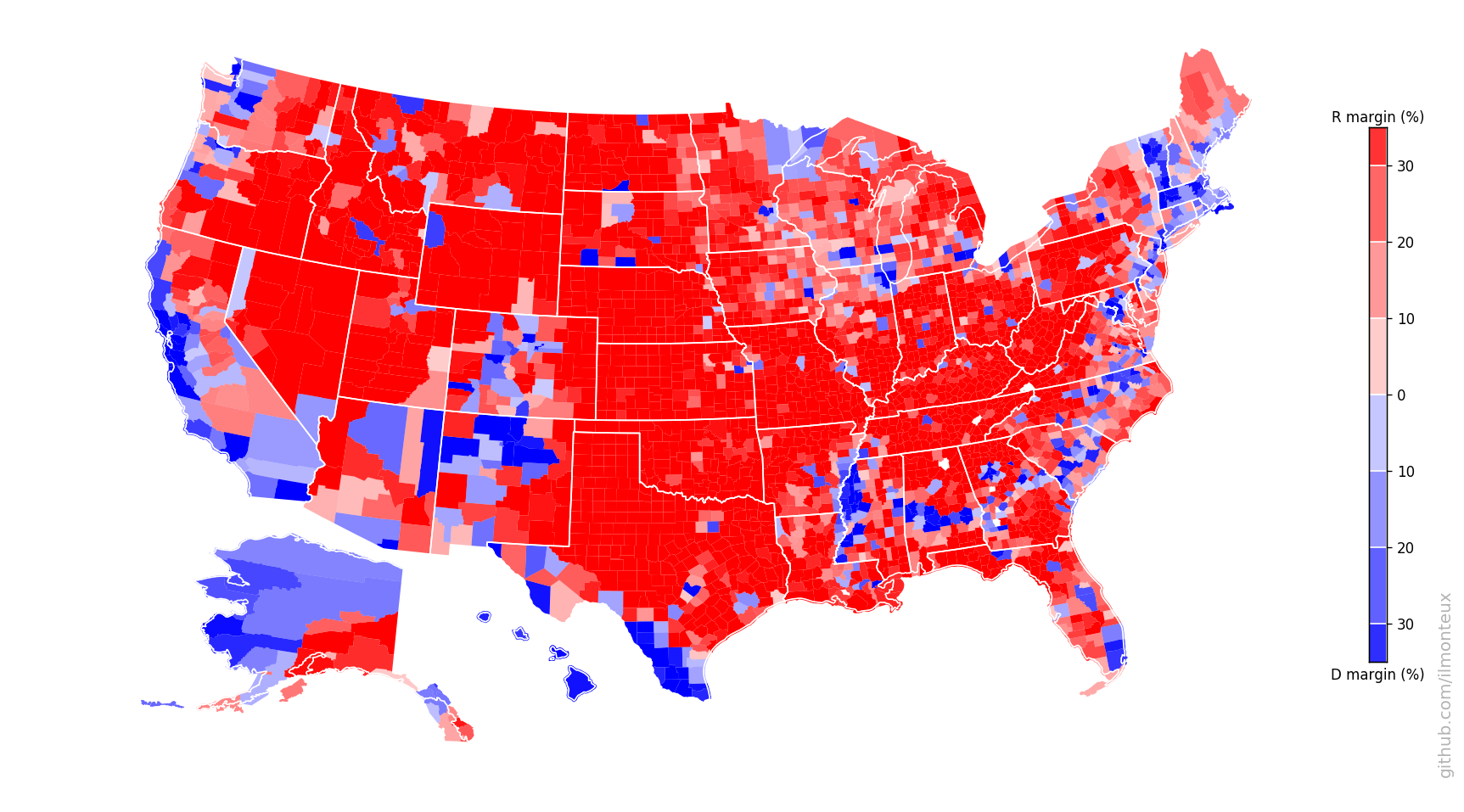 Note: technically the 2016 map was made by looking at the presidential vote, while the 2018 map shows the House vote, so the comparison should be taken with a grain of salt.

Finally, we can group the midterm election by state, and get a coarser picture. Because individual states are what decides the presidential election through the Electoral College, a comparison to the 2016 results is here more apt. 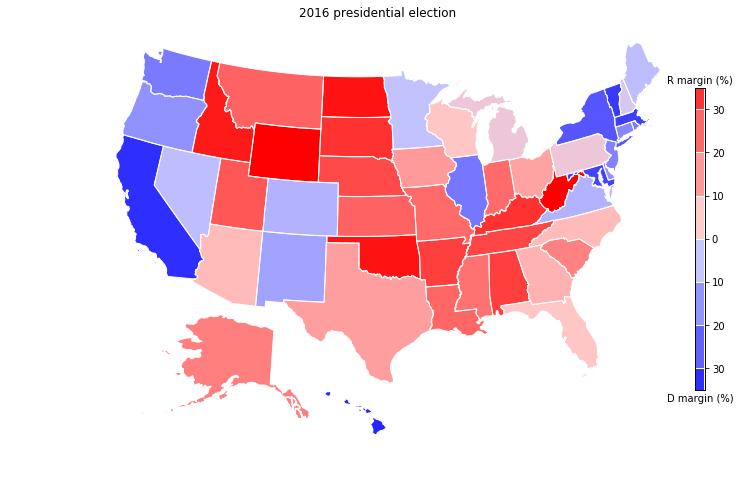 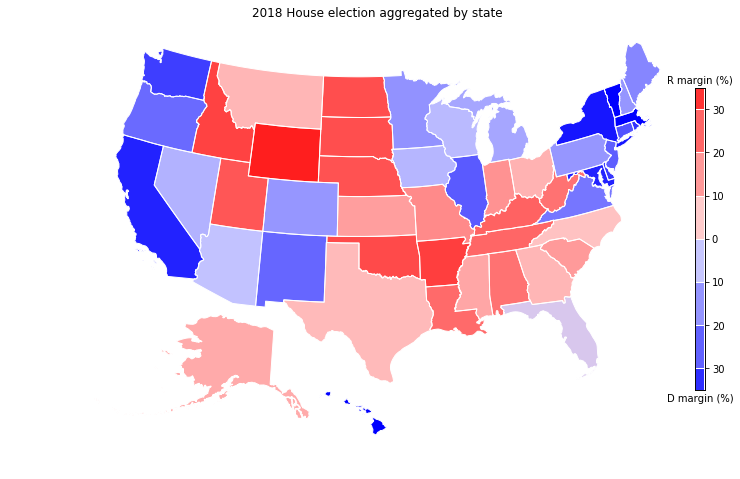 Overall, every state shifted towards Democrats (as can be expected in a wave election), some of them more than others.

That’s it for now! It would be fun to make cartograms of the above maps following my cartograms project, but that’s all I had time for this weekend.

The combined dataset is 220 MB and can be downloaded from my AWS account: